Made with ♥ remotely from

Huddersfield: Mauricio Pochettino admitted he is running out of ways to describe Harry Kane after the in-form Tottenham striker inspired a ruthless 4-0 rout of Huddersfield.

Kane scored a wonderful brace at the John Smith’s Stadium on Saturday as Pochettino’s side kept the pressure on the Premier League pace setters.

The England international was the catalyst for Tottenham’s victory and he remains the most lethal striker in European football at the moment, with his double making it 13 goals in his last eight matches. 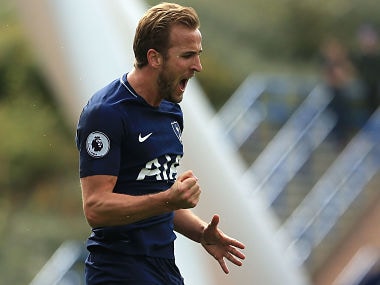 Ben Davies and Moussa Sissoko also scored for Tottenham, but there was no denying Kane was again the man of the moment and even the Huddersfield’s fans applauded him off the pitch when he was substituted towards the end.

“It so difficult to talk every three days about Harry Kane and find different words to describe him,” Pochettino said.

Suarez has struggled for Barcelona so far this season, managing to score just three goals across all competitions despite the La Liga giants enjoying a fine start to the campaign.

As a result, transfer talk has emerged that the Catalan giants could be set to replace him with Atletico Madrid hitman Antoine Griezmann at the end of the season.

Cristiano Ronaldo and Lieke Martens were named FIFA men’s and women’s player of the year respectively at the governing body’s annual ‘The Best’ football awards, which took place in London on Monday night.

The Real Madrid forward retained the title he won in 2016 – again finishing ahead of Lionel Messi in a vote between national team players, coaches, media and fans – meaning that he has now been named FIFA’s top male footballer five times. He took 43.16% of the total vote, reflecting a year in which he won a Champions League and La Liga double with Real Madrid, continuing to put top-class opponents to the sword with astounding regularity. His two goals against Juventus in Cardiff helped Real achieve continental supremacy for the 12th time and he had already scored a hat-trick against Atlético Madrid in the semi-finals.

Asked how long he could keep up this level of form, Ronaldo said: “I don’t know, I just enjoy the moment, the moment is great. I feel happy, I’m 32 and have won best player in the world and I’m so glad. I don’t know what’s going to happen in the next year. I just try to focus on the moment.”

Ronaldo acknowledged the competition provided by Messi and Neymar, who finished third in the men’s rankings, although the published voting results revealed that neither he nor Messi had deemed one another the best player of the past year.

Martens, who scored three goals in Holland’s triumphant Euro 2017 campaign and won the tournament’s golden ball award, was unable to attend due to Tuesday’s world cup qualifier against Norway but received her trophy from Marco van Basten while preparing with the national te

Cristiano Ronaldo will be hoping to lead Portugal to the 2018 World Cup in Russia — and the Real Madrid talisman appeared in relaxed mood during training on Tuesday.

Even after seven straight wins — and an expected eighth at Andorra on Saturday — European champions Portugal are not guaranteed to be at the world cup.

Ronaldo and Co go into the weekend fixture three points behind Group B leaders Switzerland, who they face in a mouthwatering fixture next week. And the former Manchester United superstar was among the players pictured in training at their base near Lisbon before they travel to Andorra for their clash.

The Portuguese stars were gently put through their paces, with Ronaldo taking time out of the session to stretch his leg muscles on numerous occasions.

Group leaders Switzerland have won eight straight, including an opening 2-0 victory over a Portugal team without Ronaldo, ahead of hosting Hungary on Saturday. It all points to a showdown in Lisbon next Tuesday to win the group and take the automatic qualifying place.

Portugal have the edge if goal difference is the tie-breaker. Helped by Ronaldo’s European-best 14 goals, Portugal are already nine superior to the Swiss before facing Andorra, who they beat 6-0 at home earlier in the group-stage cam

In the 79th minute at the Santiago Bernabeu on Saturday night, Marco Asensio replaced Cristiano Ronaldo.

As soon as Ronaldo exited the Getafe game, it became apparent that the forward was in a bit of pain.

Ronaldo sat down on the bench, rolled down his right sock, and pointed to his calf.

With his leg elevated, Ronaldo iced his leg as a medic supervised the treatment.

So is Ronaldo injured? Ahead of Tuesday night’s Champions League match at PSG, there doesn’t seem to be any real cause for concern.

It’s thought Ronaldo had a minor knock, but that shouldn’t affect his availability in Paris .

3-1 up from the first-leg, Real Madrid are looking to win the Champions League for the third season in a row.

Cristiano Ronaldo scored twice as Real Madrid came from behind to beat Paris St Germain 3-1 on Wednesday, with the holders roaring back to life in the Champions League last-16 first leg tie after a dismal domestic campaign.

Adrien Rabiot smashed runaway Ligue 1 leaders PSG ahead in the 33rd minute but Ronaldo levelled from the penalty spot on the stroke of halftime, scoring his 100th Champions League goal for Real to set up a pulsating second half.

Ronaldo put Real in front in the 83rd minute with a scrappy strike from close range, following a cross by Marco Asensio, who made an impressive cameo appearance off the bench.

Brazilian left back Marcelo further stretched the lead in the 86th, giving PSG a tough task in the second leg at the Parc des Princes on March 6.