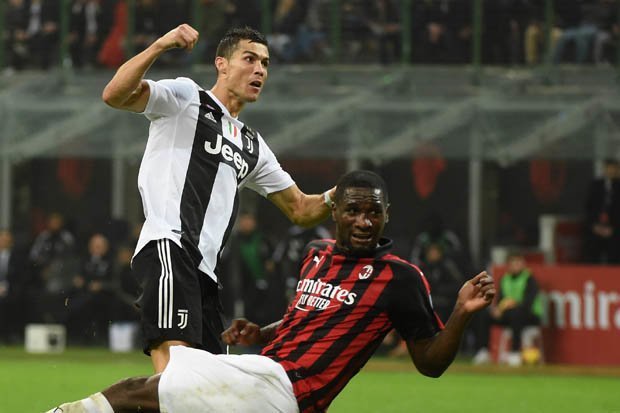 The former Real Madrid forward has hit the ground running in Serie A, netting nine goals in 13 league appearances this term.

But according to former AC Milan sporting director Massimiliano Maribelli, the 33-year-old could have been plying his trade in Italy one year earlier if things had worked out differently.

It was an operation that came to mind and we spoke with Jorge Mendes, we knew he could have problems with Real Madrid, we also talked about the contract and we did everything,” he told SportItalia.

“Then the Chinese owner blocked the agreement because it was not sustainable.

“With the current owners Cristiano Ronaldo would have been a Rossonero player.

Speaking about his decision to leave Madrid earlier this summer, Ronaldo said: “I felt it inside the club, especially from the president, that they no longer considered me the same way that they did in the start.

“In the first four or five years there I had the feeling of being ‘Cristiano Ronaldo’. Less aft

Real Madrid have failed to convince so far this season and must improve quickly if they are to maintain the success their fans have become accustomed to, according to former striker Predrag Mijatovic.

Madrid qualified for the Champions League last 16 as Group G winners with a 2-0 win at Roma on Tuesday but this has been a tumultuous campaign for the club.

Julen Lopetegui was sacked after only 14 matches in charge following last month’s 5-1 Clasico drubbing at the hands of Barcelona and successor Santiago Solari oversaw a shock 3-0 defeat at Eibar in his first game as permanent head coach last weekend.

Madrid are aiming for a fourth consecutive European crown but Mijatovic, who scored the winning goal in the 1998 Champions League final against Juventus, is yet to see evidence that it can be delivered.

“I want to see how Madrid respond next Saturday against Valencia. Madrid have to win but also put on a good performance

Barcelona striker Lionel Messi has overtaken Cristiano Ronaldo of Portugal to reclaim the record of being the top goal scorer in the Champion League for one club.

London: Barcelona striker Lionel Messi has overtaken Cristiano Ronaldo of Portugal to reclaim the record of being the top goal scorer in the Champions League for one club.

MILAN: Juventus coach Massimiliano Allegri has urged his side to step on the gas in December to tighten their grip on an eighth successive Serie A title before they turn their focus back to their Champions League pursuit in February.

The Italian champions booked their ticket to the knockout rounds of the elite European competition with a game to spare this week with Cristiano Ronaldo setting up Mario Mandzukic to score the only goal against Valencia.

Next up will be a trip to Tuscany side Fiorentina on Saturday, the first of six league games before the end of 2018, which includes home games against European rivals Inter Milan and Roma in Turin.

“We have reached the first goal with Champions League qualification, now we must maintain the same energy throughout December,” said Allegri.

Juventus are eight points ahead of second-placed Napoli, who were held to a goalless draw against bottom club Chievo last weekend.

But Allegri said: “We still have lots of matches to play, by dropping three points you might lose the championships in the end.

“We hope to bring all the trop

Real Madrid got back into the title race in La Liga after a thrilling 4-2 win away to Celta Vigo on Sunday. Los Blancos won on a day when leaders Barcelona were stunned at home by Real Betis, who left the Camp Nou with a memorable 4-3 triumph despite Lionel Messi scoring a brace on his return from injury.

Real are sixth but have cut the gap at the top to just four points. Barca’s more immediate concern is the form of Alaves and Sevilla, who both trail the champions by just a point after wins over Huesca and Espanyol, respectively.

Rayo Vallecano and Villarreal shared four goals in the day’s only stalemate.

Only four points separate the top six in #LaLigaSantander! 🔝🔥 https://t.co/ITlOgKfplD

Real built a two-goal cushion in Balaidos thanks to a Karim Benzema finish and an own goal from Gustavo Cabral. Hugo Mallo got one back for the hosts before Sergio Ramos scored a penalty for Los Merengues seven minutes from time.

Benzema has found some form at a useful moment for Real in the wake of Cristiano Ronaldo joining Juventus this summer:

Karim Benzema has now scored as many league goals (5) as he did all of last season.

Celta’s comeback cause suffered a fatal blow when Cabral was sent off in the 87th minute. Real took full advantage and sealed the points when Dani Ceballos scored in stoppage time.

There was still time for Brais Mendez to score a second for Celta, but his 94th-minute finish was largely academic. Real are now on an impressive upturn under careta

Sevilla moved to the top of La Liga and one point ahead of Barcelona on Sunday after Andre Silva supplied the winner in their 1-0 Week 13 clash against Real Valladolid.

Manager Pablo Machin’s side are now unbeaten in their last four, while Silva’s hot streak in Spain continues as he took his tally to eight, just two shy of the league’s top scorer.

That accolade goes to Cristhian Stuani of Girona, who found the mark twice at Espanyol and became the first player in La Liga this season to reach 10 goals in the process. Stuani’s brace also helped extend Girona’s unbeaten streak to five games in succession to move the side up to seventh.

Elsewhere, Villarreal finally got their first home league win of the season after defeating Real Betis 2-1, which lifts them up to 16th and three points away from the relegation zone.

Athletic Bilbao shared the spoils with guests Getafe at San Mames in Sunday’s early kick-off. Peru Nolaskoain and Jaime Mata each scored in the second half for Athletic and Getafe, respectively, as Los Leones relinquished their 67th-minute lead and were restricted to just a point.

Turin (Italy) (AFP) – Cristiano Ronaldo could not hide his frustration that despite scoring his first Champions League goal for Juventus the Italian side ‘gifted’ a dramatic late 2-1 victory to Manchester United.

Ronaldo struck with a magnificent first-time volley on 65 minutes to leave Juve on course for the knockout phase, but Juan Mata equalised with an 86th-minute free-kick before Leonardo Bonucci turned into his own net.

It was the 121st goal in the competition for five-time Champions League winner Ronaldo who Juventus are counting on to help them lift their first European title since 1996.

Instead they must now wait for the remaining games against Valencia and Young Boys to seal their passage to the next round.

TURIN, Italy (AFP) – Juventus coach Massimiliano Allegri hailed the impact Cristiano Ronaldo was having on the Italian champions as the Portuguese star became the first player to achieve 100 Champions League wins in early yesterday’s 1-0 success over Valencia that clinched their passage to the knockout rounds.

“Ronaldo gives us a sense of security and confidence,” said Allegri of the beaten finalists in two of the last four editions of the elite European competition.

“The team are essentially the same as last season. We’ve grown, become faster in playing the ball, but then of course, there is Cristiano Ronaldo.

“This team are constantly improving – they’re passing and putting play together more quickly.”

Ronaldo – who joined Juventus last summer from Real Madrid – is targetting a sixth Champions League title to add to his four with the Spanish team and one with Manchester United.

The Italian team are looking for their third European title and first since 1995.

Atletico Madrid boss Diego Simeone has claimed that only one player can beat five-time Ballon d’Or winners Cristiano Ronaldo and Lionel Messi to this year’s edition of the award.

In case you didn’t know…

The likes of Lionel Messi and Cristiano Ronaldo have predictably made it to the thirty-man shortlist for the 2018 Ballon d’Or.

As the award ceremony draws closer, speculation around Messi and Ronaldo’s absence from the final three list for the award have been doing the rounds, with reports suggesting that Luka Modric, Raphael Varane and Kylian Mbappe will fill the top spots instead.

The heart of the matter

Atletico Madrid star Antoine Griezmann is also in the running for the award and has now received the backing of his club boss Diego Simeone, who believes that the Frenchman has done enough to finish above Messi and Ronaldo this year.

According to a report in The Express, Simeone said, “We can safely say that Cristiano [Ronaldo] and Lionel Messi are the best footballers in the world. But not in 2018.”

“At this lap Antoine was superior to everyone, nobody did what he did for his teams.”

He added, “When a footballer makes sure that the whole team can work based on his brain, it has an incalculable value.”

“France plays thanks to his intelligence, when he is wel